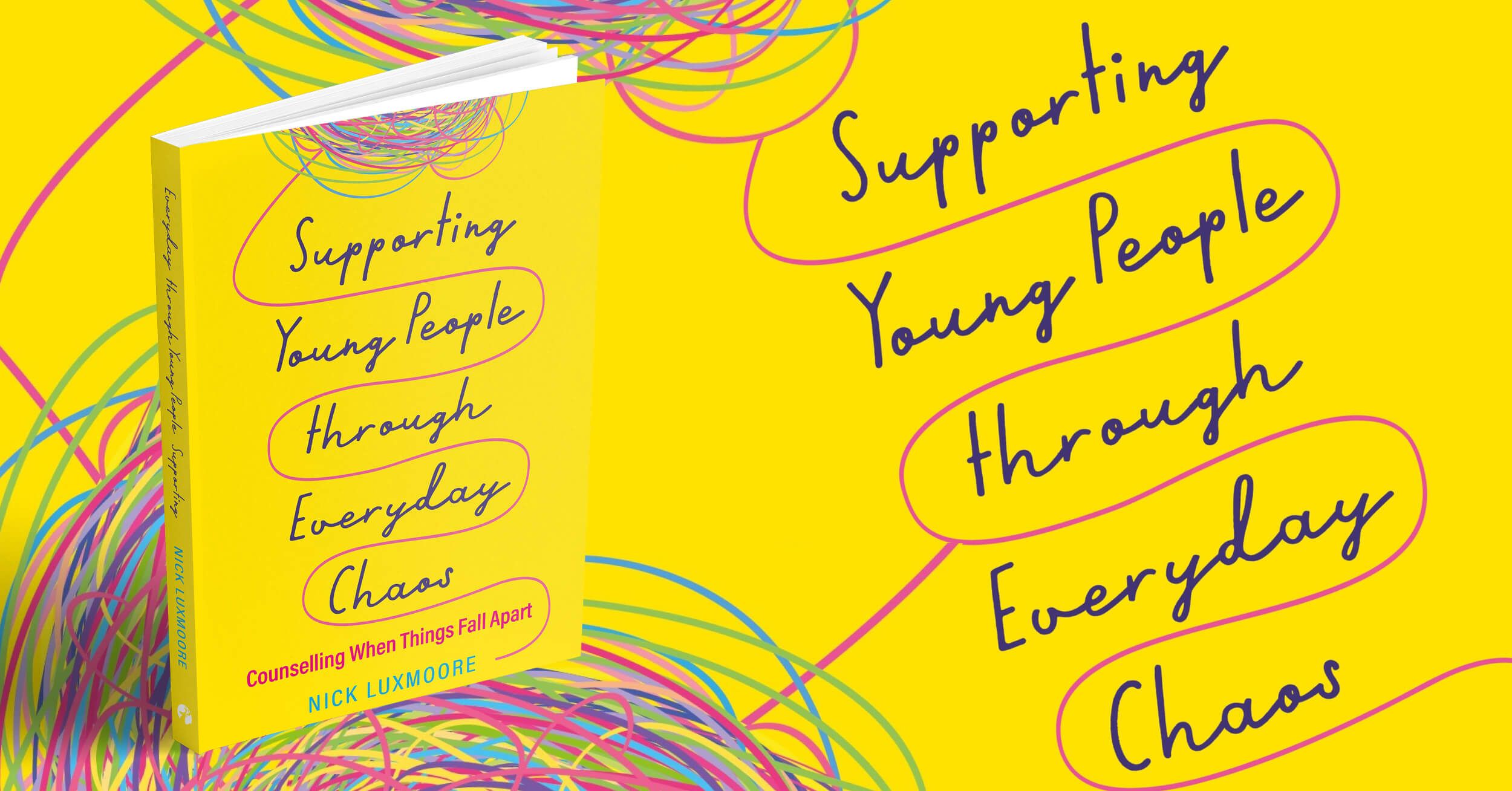 Credit: This excerpt is taken from pages 69-75 of Supporting Young People through Everyday Chaos by the late Nick Luxmoore, published by Jessica Kingsley Publishers. Discover more about the book and get 15% off with the code MINDSUM15 here.

‘This might be a weird question,’ says Lennon, looking at me quizzically, ‘but do you think I’m normal?’ It’s actually a great question because it’s the one that young people ask in roundabout ways most of the time. They just don’t dare to ask it so explicitly. Like Lennon, they might aspire to normality but remain afraid of madness and fascinated by madness. On the one hand, they’re quick to call each other ‘lunatic’, ‘psycho’, ‘schiz’, ‘nutter’ and variations on that theme. On the other hand, they proudly tell drunken stories about having been ‘completely out of it, off my trolley’, or they tell angry stories about having ‘gone nuts, gone mental’. The idea of being mad is both awful and attractive.

And fascinating. I remember, as a teacher, the popularity of the book in my classroom library about the meaning of dreams. Students would try to remember a dream they’d had, then look up its alleged ‘meaning’ in the book, keen to discuss whatever they found there. It was as if they suspected that sanity might not be straightforward, that they all had the potential to ‘go crazy’ or at least dream some extremely weird and interesting dreams. Lennon asks, ‘Do you think I’m normal?’ but he might just as well be asking, ‘Do you think I’m complicated? Do you think there’s more to me than people realise?’, half-hoping that I’ll say, ‘Yes, you’re very complicated, Lennon! And because you’re very complicated, you’re very interesting.’ He’d be pleased. ‘It’s just that I’ve started wondering why I do things,’ he says. ‘Why I really do them. Because I know I’ve done some pretty stupid things, but I honestly don’t know why. Like when I did that thing with the supply teacher’s car, and I knew I shouldn’t do it – I knew I’d get into trouble – but I did it anyway! I mean, that’s not normal, is it, doing stuff like that?’

Much as they might habitually see mental health in binary terms – you’re either ill or you’re not – young people know that it’s never that simple, that they’re never that simple. If the idea of ‘mental illness’ attempts to put a verbal frame around chaos, to stop it spilling out and contaminating our everyday lives, young people know perfectly well that sometimes ‘shit happens’. Chaotic shit. Falling-apart shit. And sometimes it keeps happening. They know that, despite everything, there are times when they feel desperate and want to run away from home or get themselves expelled from school. There are times when they imagine killing themselves. ‘So, do you think I’m normal?’ I ask him what he thinks ‘normal’ means. He laughs. ‘That’s what I’m asking you!’ I say that we’re all normal in some ways and not normal in other ways; we’re all like other people and we’re all different from other people…‘Okay, I get that,’ he says, ‘but would you say I’m normal?’

Like so many other young people, Lennon’s asking for feedback and deserves some sort of response. Like his peers, he might want to add, ‘Do I have the symptoms of a mental illness? Do you think I could have depression? Do you think I should be taking myself more seriously or less seriously? Because sometimes I do feel really bad…!’

The campaigners’ assertion that ‘most mental illnesses begin in adolescence’ is regularly trotted out as a warning, as a way of getting adolescent mental health taken seriously, and as a way of getting desperately needed funding for a very important cause. But as an assertion it’s a bit like saying that most patterns of behaviour stem from family relationships, that a lot of unhappiness is rooted in childhood experience or that we inherit many characteristics from our parents. These things are obvious. What makes the assertion unhelpful is when it leads to young people and their parents anxiously looking for diagnosable signs of mental illness in what is normally turbulent adolescent behaviour. Have I got something wrong with me? Am I hearing voices? Is my son depressed? Is my daughter suffering from anxiety? A nice juicy psychiatric diagnosis, delivered with apparent certainty, makes everyone feel less anxious.

Of course, we should never be complacent about mental illness. Of course, young people need to be taken seriously and supported warmly and effectively throughout adolescence. But we’ve started talking of ‘mental illness’ as if we necessarily know what we mean. Words like ‘depression’ and ‘anxiety’ are huge psychiatric generalisations. The fact is that all adolescents like Lennon have wondered whether there’s something wrong with them, whether they’re normal; they’ve all wondered what it would be like to be dead, whether they’d be missed. Talk of an ‘adolescent mental health crisis’ increases their tendency to catastrophise, and then when their behaviours get pathologised and given a label by professionals, they’re only too happy to start talking nonchalantly about their ‘triggers’ and believing the apparent simplicity of a psychiatric diagnosis.

We’d be better off thinking of adolescence itself as a state of mental illness, as a state of physical and neurological turbulence, as a state of extreme developmental flux, as a kind of personality disorder from which, fortunately, adolescents are likely to recover, provided that the turbulence is understood as inevitable rather than exceptional, and provided that adults don’t rush to pathologise young people’s distress with premature labels or medications. Blakemore (2018) describes the complex coming-together of hormonal and environmental factors affecting the adolescent brain: factors that cause every young person at times to seem out of kilter.

And as a brain develops in relation to its environment, so a young person develops in relation to the feedback that he or she receives: feedback approving or disapproving of certain behaviours, feelings, thoughts. Young people need this recognition, this feedback, not only to be sure that they exist and are interesting, but also to be sure that they make sense, that they’re not mad. ‘Am I understandable?’ is another version of Lennon’s question. ‘Please tell me if I’m understandable! Because if I’m not, then that’s frightening because it means I might be mad!’

Chaos is sometimes an absence of other people in our lives. Needing recognition and affirmation, young people will do anything – however disturbing – to make other people take notice, because without the containment of other people’s recognition, life is terrifying. A young person like Lennon, worrying about his ‘mental health’, might also be a young person worrying about himself in relation to other people. ‘Am I normal? Am I understandable? Am I mad? Why exactly did I do that thing to the supply teacher’s car?’ If the chaos of adolescence is all about trying out different identities, different parts of ourselves, seeing what fits, what gets approval and what doesn’t, then young people live forever in the tension between sameness and difference, between being like and unlike each other. It therefore makes sense for them either to split off the ‘mad’, unacceptable, ‘other’ parts of themselves, vehemently attributing them to other people (and possibly bullying those people), or to believe that malignant viruses with names like ‘depression’, ‘anxiety’ and ‘personality disorder’ have somehow invaded their adolescent selves. ‘After all,’ they might reasonably conclude, ‘I never used to be like this!’

The mental health of young people is necessarily chaotic, which is different from having a mental illness or the beginnings of one. It’s easy for young people to type questions about their feelings onto a webpage and be told that they might be suffering from any number of mental illnesses with exotic names. And it’s easy to extrapolate from that. ‘So the reason I did that thing to the supply teacher’s car,’ Lennon might conclude, ‘is because I’ve got a narcissistic personality disorder or because I’ve got oppositional defiant disorder or because I’m bi-polar or schizophrenic.’

Instead of splitting off the ‘mad’, chaotic parts of themselves, attributing them to other people and denouncing them, young people have to learn to accept these unruly parts of themselves. As with Alison in the previous chapter, I’ve often said to young people who’ve seemed especially obedient, inhibited or terrified of failure, something like, ‘In addition to being obedient and shy and hard-working, all things people already know about you, I imagine that you can also be wild and crazy and can sometimes do mad things!’ They purr with pleasure because they know it’s true and because they’ve been waiting and hoping that someone will notice that there’s more to them than meets the eye. Young people like their madness if ‘mad’ means spontaneous, original, unconventional. They get scared if ‘mad’ means alien, incomprehensible and out of control.

‘…then I’d say yes and no. And I’d say it’s good that you’re normal and it’s good that you’re not normal. I like both parts of you. I think they’re both important.’ He looks as if he can’t decide whether to kiss me or curse me. ‘Fair enough,’ he mumbles, ‘if you say so. But I still don’t get why I did that thing to the teacher’s car…’ I remember the incident. He was excluded from school for several days and had to pay for the damage. When the school then suggested to his mother that her son might need a psychiatric assessment, his mother refused to countenance such an idea (‘My son’s not a psycho!’) and walked out of the meeting. The eventual compromise was that Lennon would start meeting with me, the school counsellor.

We ask young people why they did things. ‘Why did you scratch the supply teacher’s car and then urinate all over it? Because if you don’t understand why you did it, if you did it mindlessly, without knowing why, then that’s scary because you might have something wrong with you! You might need a psychiatric assessment!’

‘We don’t always know why we do things,’ I say to him. ‘Maybe you were angry with the supply teacher, or wanted to know more about her, or maybe even – and this might sound really strange – you damaged her car because you wanted to feel closer to her!’ He recoils. ‘You’re joking, aren’t you? No way! That’s weird!’ And so we begin a conversation about how the unconscious might work: that having an unconscious in the first place isn’t a sign of being mad; that sometimes we feel both hate and love for the same person; that people like supply teachers sometimes powerfully remind us of other people in our lives, and so on.  ‘Yeah, but why did I have to piss on her car?’ he asks. ‘That’s not normal, is it?’ ‘It’s not what people do,’ I assure him. ‘It’s not a good thing to do, and of course it got you into trouble. Big trouble. If you pissed on my car, I’d want you to get into trouble! So it wasn’t a normal thing to do, but feeling secretly angry with someone, or feeling ignored by someone, or wanting to be closer to someone… Those are normal things that normal people feel.’ Unconvinced, he shakes his head. ‘You’ve got some really weird ideas!’